Skip to Main Content
[ This is a blog series about the game No Man’s Sky: NEXT where I summarise my playthrough in a fictional story. Not everything I get up to, like collecting resources, is included, as that would be boring. Spoiler warning. ]

After reading that message, I feel shaken. So I decide to leave this system, and warp to the one after that. The ships computer tells me the hyperdrive is now out of fuel. 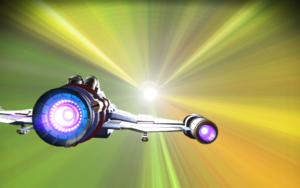 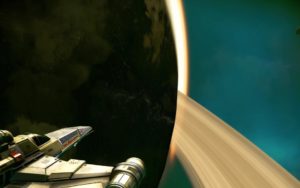 Ignoring the number popping up again with some uneasiness, I accept the guidance from the computer. It is pointing to this planet that is mostly water with little islands. 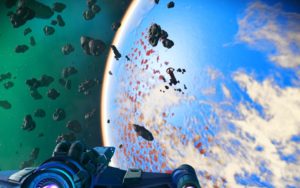 The coordinates lead me to a monolith of an unknown culture. 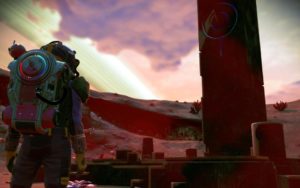 Around it are these cylindrical objects, the words ‘language stone’ pop into my head. I must have seen these before and forgot. I push the palm of my hand against it and I see an image of an electronic lifeform,  the name ‘Korvax’ floats in my vision. A word in this aliens tongue is seared into my brain. I learn a new word from each of the stumpy pillars.

I turn my attention to the center of this monolith, a small circular dais on the floor. This one is called Tribute to Eemons. Somehow my suits systems just know this.

This structure is unlike anything I’ve encountered so far. Everything about it is so obviously alien and out of place. It is made of ad ark material, shimmering in the sunlight, fain striations all over it. Weird cubes scattered around as if they are bricks that fell from a wall, yet there is no place they could have come from.

As I stare at the dais, words form themselves in my mind, a strange fragment of broken speech: ‘Is it Traveller? Is it friend?‘

‘It is Traveller’ I utter, unsure what kind of question it is asking. Also, did I just call myself ‘it’? I feel silly. But same thing has taken notice of my reply. I get an overwhelming sense that something has awoken, that someone is watching me.

Another question: ‘Is it first? Is it last?’. ‘err, it is first’ I say, since I don’t know of any before me. Any of anything. Yet I cannot escape the feeling that the ancient monolith has asked these questions many times over.

I flinch and recoil at this onslaught, my ears ringing, even though this voice only existed in my head. I walk back to my ship to sit in quiet for a while. Am I traveller? What anomaly did it mean? A breach?

I start the engines up and fly back into space. There are strange powers at work. I have been left messages, like crumbs along a trail. Should I keep on following them, investigate these ‘anomalies’? I could also turn my back and run the opposite way… No, I decide, I want to know what this means.

A whir from the ship systems breaks my trance. ‘Anomaly detected’ is on the screen. I look toward the coordinates and see a spherical object floating in space. Is this *that* anomaly? I go to have a look. As I get closer, I see it is almost big enough to be a station. I steer my ship through the entrance, which snaps open to reveal a docking tube dipped in red lights. 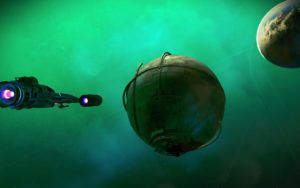 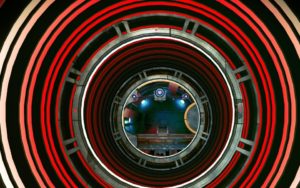 After my ship is automatically landed, I hop out and stop, staring at the circular door leading into the center of the sphere. was this even a good idea, I wonder.

Carefully stepping up the ramp and through the door, I see two life forms in the central room. A Korvax and a lizard-like creature wearing goggles. 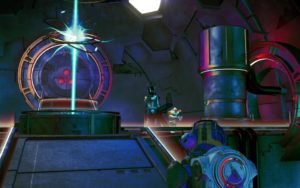 I approach the Korvax as nonthreatening as I can. 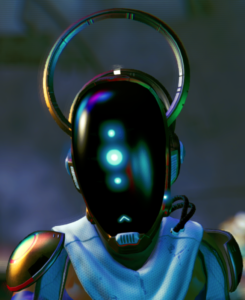 The panels and systems idle. This entity stares at them, their mask waning, this single word issuing from them as a refrain…

-{{ Traveller hopes to make progress. Traveller tests themselves. Nada will help. An exchange. Progress for progress. }}-

I transmit data I have collected so far, sharing knowledge seems like a right thing to do.

And with that, I am given a new blueprint. I am sure it will be useful.

I turn to the other life form, who seems to be waiting anxiously. 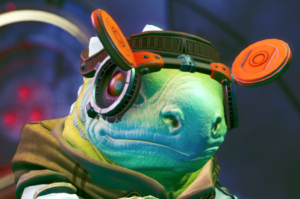 -{{ Friends everywhere, if only you know where to look. Friends in all shapes, all sizes, all places! }}-

They wipe their grease covered hands on their suit as they speak to me. They introduce themselves as Specialist Polo, fugitive of the Gek.

They tell me they gave up trade, units, and all material possessions to flee into an anomaly outside of time and space with a robotic priest. They have a jocular air about them.

Polo is curious about my travels, about what sentient species I have seen. They do not get out much these days, they tell me.

I agree to find some data for Polo.

So I wave goodbye and make for my ship. I should talk to some other life forms, Polo said. So I set course for the systems space station, sure to be busy with life. I’m glad I wasn’t wrong when I arrive there. 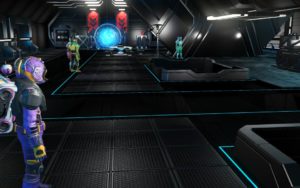 However, Polo asked I talk to a lot of life forms. So I get to exploring the planets of this system. Scanning all the flora and fauna as I come across it. I even found another monolith, although this one told a short story of the history of the Korvax. It did teach me an ‘atlas’ word though. I am not sure whose language that is. 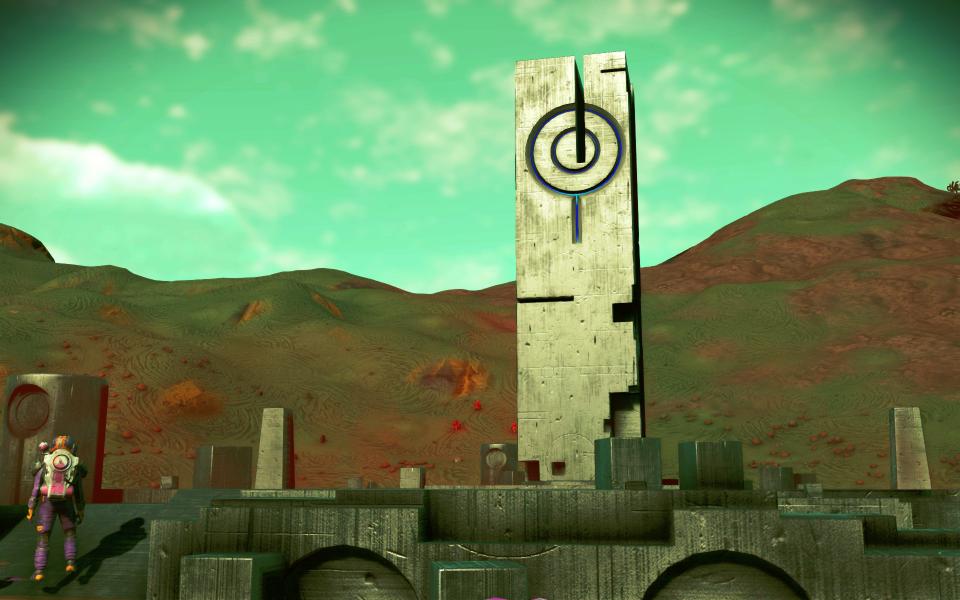